After more than two weeks with no reports of elephant visits to the farms, during breakfast we received a call from Wabongo, one of our longest standing Beehive Fence farmers, who explained a single bull had crossed his land the previous evening. The morning was cool and cloudy with some light showers, excellent weather for tracking for hours through the bush. Upon arriving at his farm it seemed to be a fairly straightforward tracking exercise – the elephant had walked straight across Wabongo’s field damaging only two sections of fencing wire upon entry and exit. Wabongo, cheery as ever, did not seem at all troubled.The tracks led us East to Mwambiti through several farms without beehive fences, though we came across no damage to speak of. Along the way we measured several well defined foot tracks and in-tact dung boluses that confirmed him as a large bull – an inveterate farm visitor nicknamed ’50-30’ after his large track dimensions. After wandering around a few fields searching in vain for any crops to eat, the elephant had headed North towards the Sagalla lodge, perhaps to take advantage of the water point there, we thought.

Esther and Emmanuel track the footsteps of the bull elephant from a fresh dung bolus through the maze of trails through the sambas.

We tracked the animal through the bush along – judging by the numerous dung boluses of various ages – a well-trodden route connecting Tsavo East National Park and the Sagalla study area. Around 4km into the track, it became clear that the elephant had no interest in hanging around on the Sagalla grounds, and instead intended to return straight to the Park. With the Mombasa Highway, the new Standard Gauge Railway and at least 3 electric fences between it and the safety of the National Park, we were definitely concerned and uncertain as to what we would find.Thankfully, the big bull seemed to make it across the highway without any trouble, likely with less traffic on the road during the middle of the night.

Ewan, Esther and Emmanuel assess the damage left by the elephant as it made it’s way straight through the electric fence towards the SGR.

As we approached the SGR, it quickly became apparent how the animal made it’s way back into the Park. Three deep-set concrete posts from the first electric fence had been ripped from the ground – two very recently, the soil underneath still damp – apparently with very little effort. Briefly following the tracks over the broken fence,  it was clear that the elephant had decided to simply march straight up the steep embankment straight over the SGR! Less than two metres to the side was another set of older tracks heading in the same direction, baked into the hard ground.We crossed under SGR just 100m to the West through the maintenance culvert there – a passage likely too low and narrow for a big bull to pass. Unsuprisingly at this point, we found the bull had broken through the electric fence on the Park-side of the SGR, crossed the old rail line and smashed through the Sheldrick electric fence that borders Tsavo East National Park. 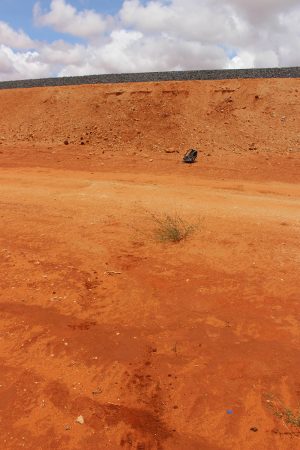 The tracks of the elephant led straight toward the embankment, disturbing the structure (dark horizontal lines) as it climbed up to the tracks.

We were all relieved to see the Bull’s safe return to the park, yet troubled by the prospect that this appeared to be by no means an isolated incident. Case in point, this event acutely highlights the need for a more adaptive, single-minded approach to managing Tsavo’s elephants. Erecting expensive fences and impassable barriers across historic elephant migration routes, while in this case clearly necessary for Kenya’s development, requires a more careful, considered planning process to incorporate the behavioural ecology of these animals. Hopefully, with time, Tsavo’s elephants will learn to take advantage of the scattered SGR wildlife underpasses that have been constructed. Until then, however, costly infrastructure damage and risky rail crossings are likely to continue…