It Takes a Village

It Takes a Village

Just a few hours drive from the Elephants and Bees Research Center, just outside Mtito Andei and the northern border of Tsavo East National Park, lays the Kamungi Conservancy Project. Kamungi Conservancy is a community internally owned and run by the people themselves, and supported by our collaborating organization Tsavo Trust to support education, improve access to health care and water, and promote harmonious living with wildlife. This month, the Elephants and Bees team joined Tsavo Trust and the Kamungi Conservancy community in a brilliant display of enthusiastic and diligent teamwork to provide the area’s fourth and newest beehive fence. 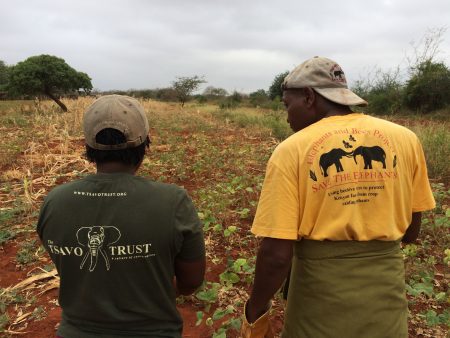 On a warm and sunny Tuesday morning, the Elephants and Bees team piled into the STE Land Rover and set off up the highway and through the bush to Tsavo Trust. Dr. Lucy, Emmanuel, our Sagalla Beehive Fence Manager, Esther, our Sagalla Project Manager, and Cara, Elephants and Bees Project Assistant, were joined by interns Bri, Clara, and Adam to create a world-class team that would join Tsavo Trust in undertaking the fastest beehive construction in Elephants and Bees history. After settling in at our comfortable and scenic accommodation at Tsavo Trust’s beautiful bush camp, a small team headed to the farm to meet our newest beehive fence farmer and measure out the fence’s perimeter, marking where each of the fifteen hives, separated by dummy hives between each one, would go. Then, while a few stayed back to prepare dinner (an absolutely essential part of any successful evening of beekeeping is the prospect of coming back to a warm and filling meal), a small team went off for night work, carrying out a training demonstration at an existing beehive fence in the Kamungi Conservancy. Here, Emmanuel and the E & B team demonstrated the addition of superboxes to hives for new beehive fence farmers. The training went fantastically, and all were back with plenty of time to fill their bellies with chili and rest up for the hard work tomorrow would bring.

By 7 am on Wednesday, the trucks were loaded, the people were caffeinated, and the mood was optimistic. Today, a beehive fence was to be built from start to finish. We arrived, greeted by the morning light shining on the beautiful Chyulu Hills in the distance. Even more beautiful to see, however, was that a few of the farmer’s family were already there, starting to dig the holes for the fence’s posts, and we felt delighted and hopeful for the day. But what happened next was a dazzling spectacle of community involvement and dedication beyond imagination. Friends and family of our fence-farmer-to-be came out in droves, and soon, the sharp point of every steel digger in sight had a person on the other end, tenaciously plowing into the red Tsavo dirt. 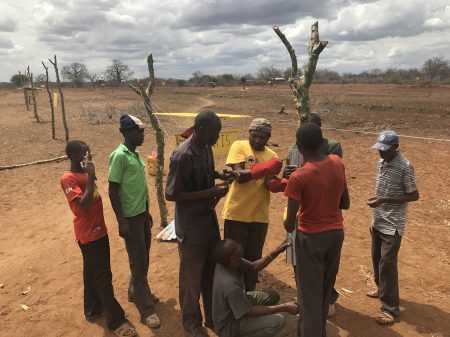 In a mere few hours, sixty holes, each the depth of a tall human’s arm, were bored into the earth. Jose Luis Rivera, former light-heavyweight boxing champion of the world, holds the official title as the world’s fastest digger. If he witnessed what happened at Kamungi that morning, he’d have run away with his tail between his legs and called Guinness to take him off of the record list. 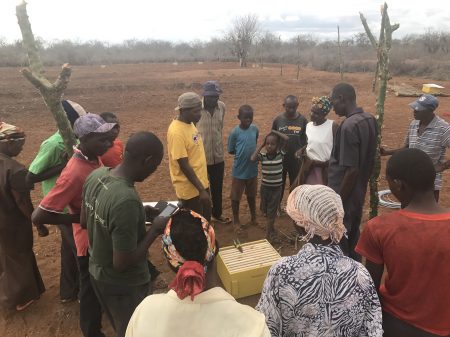 As soon as each hole was complete, it was immediately filled with a re-growing Commiphora tree that would act as the post from which the beehives would hang. Around noon, the hungry diggers dug into a pile of well-deserved chapatis with similar speed and gusto, and as soon as it had halted, the work began again. 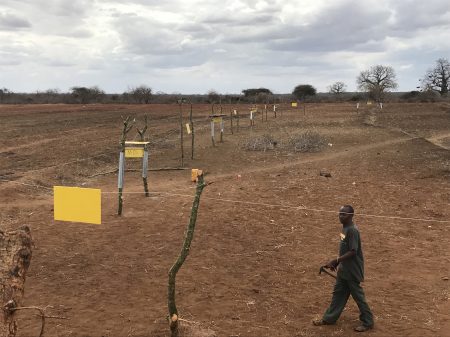 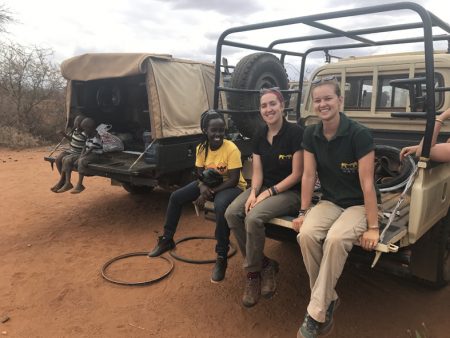 Natural shade roofs were made from grids of woven branches, wired together and covered with a thick layer of grass to protect the hives from direct sunlight. Wooden shades were also constructed from sheets of plywood. Once they were ready, each hive and shade were hung from their posts with wire, given a number, and labeled with the names of the fence’s donors. Mabati (corrugated iron) was cut to size and wrapped around each post to prevent honey badgers from climbing up to access the hives. 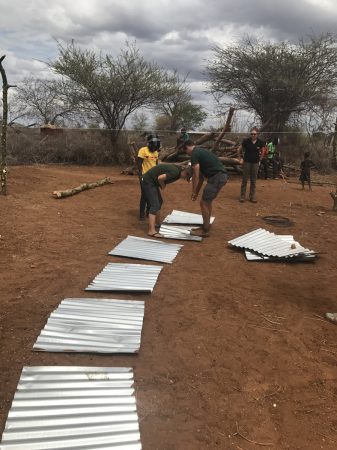 A thick wire connected each hive to the dummy on either side of it, so that if an elephant pushes against a wire trying to enter the farm, a hive will be swung and disturbed. A few finishing touches of yellow paint, and by 2:30 pm, the fence was complete. No one could believe their eyes, dazzled by its pristine construction, glimmering in the afternoon sun. 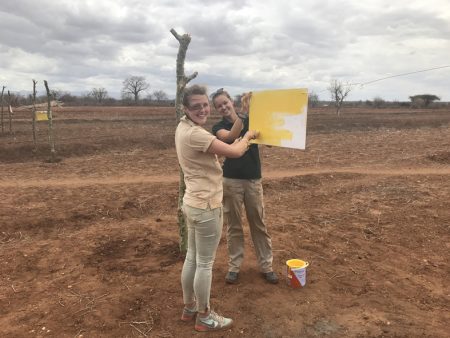 This beehive fence construction was a monumental example of what can happen when a community comes together for the greater good. It was heartening and motivating to see so many friendly faces show up, excited and ready to work hard to support a fellow family.

In just one day, Kamungi’s newest beehive fence farmer had been given not only a tool that will help him live in harmony with elephants, but a new business as well. I have no doubt he went to sleep that night armed with an arsenal of new knowledge, energized by the support of his community, feeling motivated to become a beekeeper and maintain his fence, and hopeful for the next planting season and the prospect of honey harvests and protection from crop-raiding elephants. 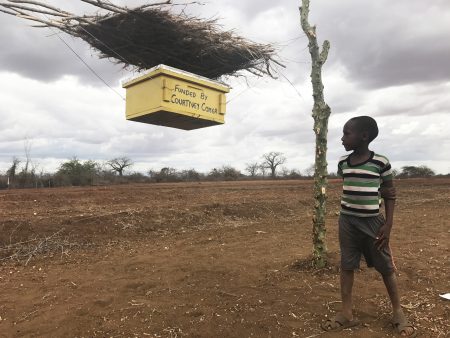 Special thanks go out to all of those at Kamungi Conservancy who enthusiastically donated their time and efforts to the project, as well as the awesome team at Tsavo Trust that organized the project, graciously hosted us, and assisted in fence construction. The fence would also not be possible without the help of Courtney Comer, who donated the funds for the fence, and Disney’s Reverse the Decline Fund for helping with transportation and logistics. When dedicated organizations, strong communities, and hardworking people come together, it paves the way for truly amazing things to happen! 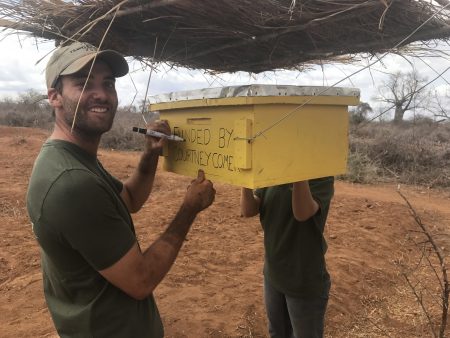