Deterring elephants with the sound of bees

My first week and a half with the Elephants and Bees Project in Kenya was filled with working on a new elephant deterrent system built and funded by the Disney Conservation Fund. Dr. Lucy King and Dr. Joseph Soltis (Disney Conservation Fund) have studied elephant reactions to sounds of disturbed honey bees played by speakers without the presence of actual bees. They observed that elephants quickly run away from the bee sounds, but the elephants eventually habituate to the bee sounds from a speaker after repeatedly experiencing the sounds without getting stung (see Dr King’s 2010 DPhil thesis for all the research details).  So, a bee sound system on its own is not enough to protect a farm from elephants for very long.

However, their studies showed that elephant habituation to the speaker sounds is slow. They imagined that habituation is slow enough that a speaker system could deter elephants from a farm during the gap between building a new beehive fence with unoccupied hives and getting wild bee occupations in the hives. Joseph asked a Disney sound system engineer, Jeff Underwood, to build a solar-powered speaker system to test this bee sound concept at a farm– and Jeff delivered! 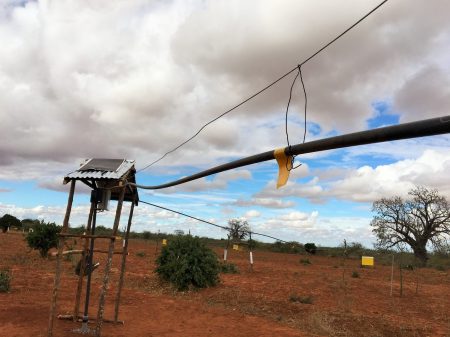 The field box component of the system is located inside the beehive fence and is attached to the fence on two sides by lengths of PVC pipes. If an elephant tries to get into the fence to go towards crops or the farmer’s house, the elephant will push against the fence wires and the two speakers will play the bee sound for 3 minutes. (Photo by Jeff Underwood) 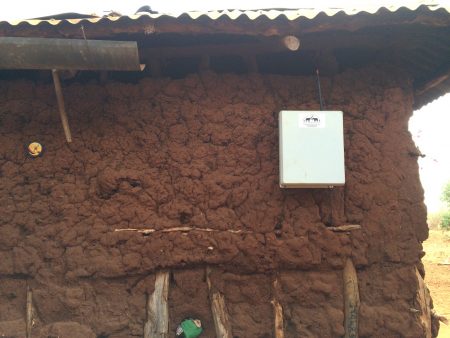 A box attached to the farmer’s house also has a button that can be pushed to manually activate the speakers inside the beehive fence. The house box is protected from the weather in this spot and any adult in the family can easily reach the buttons in an emergency. 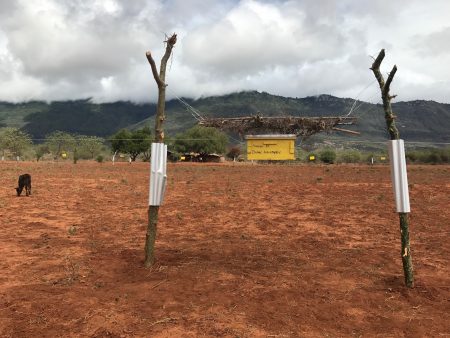 The speaker system Jeff built allows disturbed bee sounds to be automatically triggered by an elephant trying to break through a beehive fence or manually played by the farmer pushing a button. 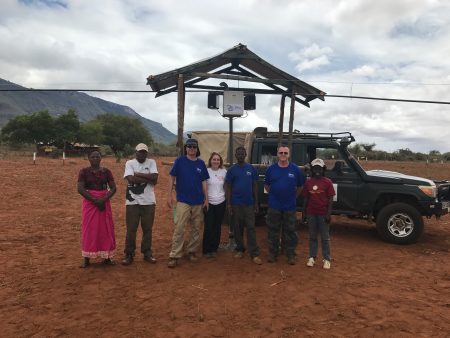 The entire beehive fence and sound system had to quickly be installed in the few days that Jeff and Joseph could be here. It was a great team effort with Leonard’s family helping to build the fence by putting in posts and making shade roofs, E&B staff and interns hanging hives and building the shade structure, and Jeff and Joseph installing the sound system. We were grateful to a generous donor from the USA who paid for the beehive fence for Leonard and his family and it perfectly coincided with setting up this bee deterrent trial around a new and empty beehive fence. 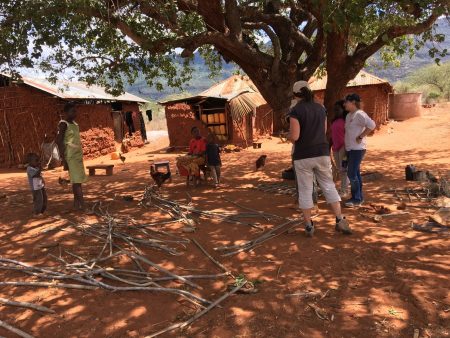 Lucy taught Leonard’s family and E&B interns how to make the shade roofs for the beehives. The open room behind Leonard’s wife in this picture is where the elephants broke through the wall.

It was very exciting to see the system working when we pushed the fence and the button. Everyone that helped with the installation can all tell you that the bee sounds are quite loud and annoying! I don’t doubt that the elephants will want to move away from the speakers quickly. I cannot wait to see how it works out for Leonard’s farm, especially because hive occupation will be slow during the current drought. 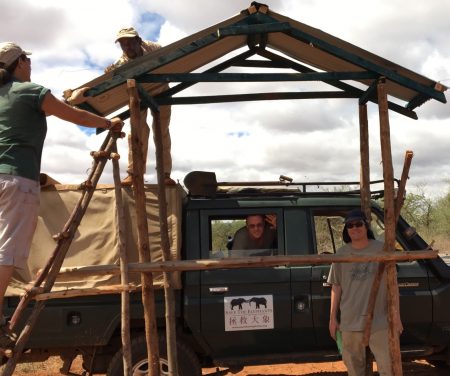 Lucy and Nzumu attach the solar panel on top of the shade roof while Jeff and Joseph enjoy a well-deserved break in the shade. Solar panels on this shade roof and the family’s house will power the whole system. (Photo by Jeff Underwood) 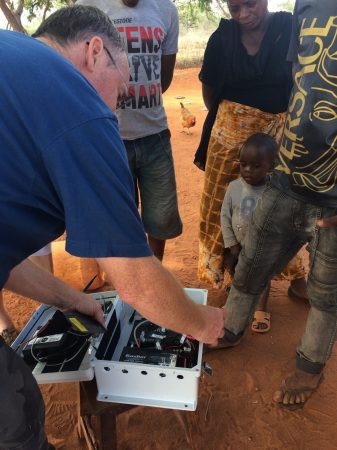 Jeff showed Leonard’s family the inside of the house box and explained how they can play the bee sound in the field. He was very patient with teaching us all how the system functions. Even while he is back in the U.S., he will continue to problem solve the speaker system with me to fine tune its functions.