Supplementary Listening:“Littlest Birds” by The Be Good Tanyas

Early mornings at the Elephants & Bees Research Center are generally quiet save for the chatter of birds. They often wake me before my alarm signals the start of each day and the birds sing with gusto, as though to pull sunrise from deep beneath the bush of Tsavo East National Park. There are so many birds at the research center that are unfamiliar to me, and I’ve been doing my best to learn how to recognize them.

To say this region has an abundance of avian life is an understatement. More than 1,000 species can be found in Kenya alone, whose roster includes the largest (ostrich), fastest (peregrine falcon) and heaviest flying birds (kori bustard) in the world. The wide spectrum of colors, morphologies, behaviors, and songs is enough to keep even the most casual birder busy for a lifetime.

The tail feather of a femaleWhite-bellied Go-Away Bird (Criniferoides leucogaster) beside our trusty copy of Zimmerman’s Birds of Kenya & Northern Tanzania.

With this fantastic array of diverse birdlife, one might easily overlook our perpetual neighbors the synanthropicbirds. A synanthrope (from the Greek syn-, “together with” + anthropos, “man”) is a wild animal or plant that lives in close association with and benefits from humans in the spaces we have created for ourselves. In this case our bird subsidization comes in the form of the camp dogs.

Winkie, Socks, and Tsavo each have a bowl of pup chow cooked for them in the morning and a constant water supply throughout the day, which is a resource the birds are quick to take advantage of. The dogs have scarcely finished their daily rations before the birds descend as the self-appointed cleanup crew to ensure that no speck of food is left uneaten. This has provided me with many opportunities to watch their behavior, enjoy their daily bird drama, and do some photography.

Common bulbuls or dark-capped bulbuls (Pycnonotus barbatus) are ubiquitous; their heads are black with a tiny ruffled crest on top, a gray back, white ear patches and breast, and tiny yellow flash on its vent (or “bird butt” to the non-bird-nerd). A passerine or perching bird, they are the boldest avian visitors to the food and water bowls and are often the first to arrive, last to leave, and congregate in small chattering gangs.

The abundant weaver birds, particularly the females, are so like one another that they are challenging to differentiate. The dizzying array of yellows, tans, grays, whites and blacks of their feathers appear in a riot of patterns that seem to run together between each species. This chaos serves as excellent camouflage in the trees around camp, which until recently were emptied of their leaves by the dry season and extended drought.

There are two weavers that I have been able to identify thanks to their conspicuous color patterns: the male Vitelline masked weaver (Ploceus velatus uluensis), whose bright yellow feathers, stark black face patch, intense red eyes, and bold flight always seems to displace the other birds when it abruptly arrives at the dog bowls.

A male Viteline masked weaver has arrived at the water bowl.

The female is a bit subtler, falling into the jumble of similar shapes and colors that characterize most female weaver birds in the area. The males are infrequent visitors and it is exciting to see their striking colors.

A male Viteline masked weaver stares down a female of the same species while her companions unhelpfully turn the other way.

Contrary to most female weavers around camp, the female Black-necked weaver (Ploceus nigricollis melanoxanthus) has colors that are as vibrant as her male counterpart. Despite what the name might imply the female actually doesn’t have a black neck like the male and instead this patch remains yellow and is accompanied by a yellow superciliary stripe (“bird eyebrows” to the non-bird-nerd) and a black eye-stripe and crown.

Look at her angry eyebrows!

One cannot talk about weavers without mentioning their nests, which are intricate and conspicuous structures woven by the male birds to attract females. They are hung from the far ends of tree branches and are built from grasses, with knots the weavers tie using their beaks and feet to secure the attachment points. What looks like a precarious nest location is in fact a defense strategy to make the nests inaccessible to snakes and other predators who might eat their eggs and young (or even adult birds).

The Red-billed firefinch (Lagonosticta senegala ruberrima) are petite feathery specks. The males are a wine-red color with a brown back, colors that serve as great camouflage against the paint behind the dog bowls and our rich orange soil. The females are a subtler dusky brown, and both sexes have tiny golden flecks called “mottling” on their breasts. They are my favorite of the camp bird species, and as The Be Good Tanyas say: “the littlest birds sing the prettiest songs”. Their song is sweet and reminiscent of the Anna’s hummingbirds that I am more familiar with back home in the US, a cyclical, oddly metallic sound that is quite high pitched and scratchy around the edges.

Red-billed firefinches perched on the swing-like vines that creep through the bushes throughout camp.

The Red-cheeked cordon-bleu (Uraeginthus bengalus) are very small colonial finches that are primarily seed eaters, but also happy to pinch a few bits of dog food when no one is looking. They are often in the company of firefinches at camp, and both species rush away in a fluttering blur when surprised while foraging by someone entering the kitchen area.

A red-cheek cordon-bleu and red-billed firefinch share space at the water bowl.

A bright red facial patch on the ear-coverts (“cheeks” for the non-bird-nerds) accents their sky blue and dusky brown coloration. The females have the same color pattern apart from this distinct red patch, and juveniles are almost entirely brown save for small splashes of sky blue on their breast, belly, and tail.

A juvenile red-cheeked cordon-bleu tries to sidle up to a group of adult males.

The Slate-coloured boubou (Laniarius funebris) are non-descript dark gray bushshrikes and are more often heard than seen.  Their “coo-coo-WEET?” call is one of the earliest I hear each morning apart from doves, often right outside of my tent. They are the first bird in this region (apart from the irritated “WAH!” of the Go-Away Bird) that I’ve learned to identify by song. Once I knew who the song belonged to it was as though they were everywhere; I was shocked to realize how many of these birds were present that I was simply not seeing.

The simple understated boubou pays us a visit.

D’Arnoud’s barbets (Trachyphonus darnaudii boehmi) are most often heard in pairs and announce their presence by singing a grating, harsh, rising and falling duet. “Cherk-a-SKRRRRRK” one screams while crouched and rapidly flagging its tail feathers as the other replies “ku-WEEER” and stands upright for emphasis with each call. It looks and sounds more like a squealing shouting match than a shared song, and it often interrupts breakfast conversations. 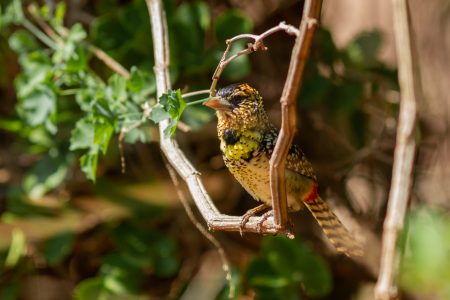 A D’Arnoud’s barbet sits on a vine, awaiting its singing companion.

Barbet feet are zygodactyl, which is the X or K-shaped toe arrangement on birds where two toes point forward and two point backward. This shape is commonly seen in woodpeckers (to whom barbets are related), owls, and osprey, and allows these different bird species to cling to the vertical surface of a tree trunk or to grasp prey. There are two subspecies that I’ve seen around camp (T. d. boehmiwith its black crown and T. d. darnaudii with a small dusting of orange on the top of its head) though it can be difficult to concentrate on telling the difference over all the noise they make.

D’Arnoud’s barbet standing beside the dog bowl, where the observant viewer will notice its zygodactyl toe structure.

Photographing the African paradise flycatcher (Terpsiphone viridis) has been my proverbial white whale; it is an arresting, preposterous bird. The males have a particularly enormous split tail streaming behind them like an anchor, making their flight appear labored and almost ungainly. I always seem to be caught without my camera when they appear in the bush like fluttering ghosts. These flycatchers typically are dimorphic, which means they occur in two distinct forms. One form (T. v. plumbeiceps) is primarily brown, with a black crested head, and blue bill and orbital rings (hey non-bird-nerds, that means the eye) but on occasion I have seen the white morph males (T. v. ferreti), sweeping almost noiselessly through the clearing beside my tent. The females do not take this white color and are sensibly without the burden of a long tail pulling them down to earth.

Finally, through the dense rainy-season bush, I managed to catch this bird with my camera! “I try all things, I achieve what I can.” – Herman Melville, Moby-Dick

While I am very nearly at the end of my time in the Elephants & Bees camp, I have only just started becoming familiar with my new bird neighbors. Birds have much to tell us if we choose to listen; even the birds that live near humans have much to say about the ecology of an area, as it reflects how we shape these spaces with our presence. What are your birds saying?